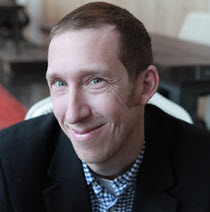 In this half-day session, Arik Hanson, seasoned PR counselor and content marketer with almost 20 years experience, talks about why today’s branded content is less than stellar and how PR pros can remedy the situation.

Attendees will take away the following:
•    “Content Cornerstones” (guidelines that are critical to your content success)
•    the pros and cons of outsourcing content vs. insourcing
•    a review of four brands that are killing it in content marketing
•    key lessons you can learn and apply to your work the very next day

During the annual membership meeting portion of the luncheon, members will vote on the slate of officers compiled by the Nominations Committee for the 2015 Greater Fort Worth Chapter. (Please note: The full slate will be released at a later date prior to the meeting.)

Walk-ups: Add an additional $5 to the above prices

To account for additional costs associated with walk-ups and other meeting services, the Greater Fort Worth Chapter of PRSA uses the following reservation policy: Online reservations are due no later than 5 pm the Friday prior to the luncheon, and cancellations must be made by 5 p.m. the day before the luncheon. No-shows will be billed or a representative may attend in that person’s place at no additional charge. Walk-ups are accepted for an additional $5 if space is available.

Arik C. Hanson, is the principal of ACH Communications, a marketing and communications consultancy focused delivering business results through an integrated mix of digital and traditional PR and marketing channels. An award-winning communicator and marketer, Arik has nearly 20 years experience in marketing, communications and PR. Over the years, he’s worked with large, Fortune 500 clients like Select Comfort, Walgreens, General Mills and Walmart, as well as smaller, more local organizations like UCare, Minnetonka Public School District and Bike Walk Twin Cities. Arik is also an ardent contributor to the local Minneapolis/St. Paul PR and marketing community. Over the years, he’s donated his time to such organizations as: PRSA (board member from 2005-2008), Children’s Hospitals & Clinics, Bolder Options, Winona State University (his alma mater) and the Minnesota Interactive Marketing Association (where he’s currently on the board). Arik’s popular PR and digital marketing blog, Communications Conversations, has been recognized as one of the leading industry blogs by a number of credible online sources in the last few years including PRWeb and PR Week. Posts from Communications Conversations are also syndicated to Ragan, PR Daily, Business 2 Community and Social Media Today regularly.

Members from across the U.S. will attend PRSA’s 2014 National Leadership Assembly on Saturday, October 11 in Washington, D.C. to discuss the State of the Society and issues facing our organization. Among the discussion items are proposals that would amend the bylaws to allow non-APR PRSA members on the Board of Directors.

-> Fort Worth PRSA Chapter members: Please review proposals 1401 and 1402 on MyPRSA and share your thoughts via comments below by September 30. (Note: you must be logged in to MyPRSA to view the documents.)

What amendments is the Board proposing for the Assembly delegates to vote on?
Proposal #1401 – Amends the bylaws to allow for eligible non-APR members to apply for either of the two At-Large seats set forth in Article V, Section 1.

Proposal #1402 – Clarifies that voting members of the PRSA Board of Directors may not serve as District or Chapter officers, Chapter delegates or alternates, Section chair, officer of the College of Fellows, member of the Board of Ethics and Professional Standards or on the UAB. However, members who serve in any of those positions may be elected to the Board in a nonvoting capacity.

What is being changed in the bylaws?
Proposal #1401 amends Article V, Section 2 to allow for eligible members who do not possess the APR credential to serve in an At-Large capacity on the PRSA Board of Directors. It further states that the APR credential is necessary for those eligible members who would like to represent a District or serve on the Executive Committee of the Board.

Proposal #1402 adds the word “voting” to clarify that board members eligible to vote may not serve in other volunteer roles within the organization.

What brought about the proposed amendment?
There have been ongoing discussions at Assembly on PRSA’s longstanding policy of holding the APR as a prerequisite to serving on the PRSA National Board of Directors. Simultaneously, the PRSA National Board says the number of applicants for the APR credential has steadily declined, and that has created a struggle to source a complete slate of candidates who are eligible for national office service.

According to PRSA, three years of independent research and studies indicate that the majority of membership sees the APR as a mark of personal achievement do not believe it to be a validation of leadership ability.

The PRSA National Board felt that PRSA needed to evolve the composition of the board and provide representation at the national level to non-APR members. The proposed bylaw is intended to allow PRSA to tap into a larger pool of potential leaders.

Joe Cohen, APR, 2014 chair of PRSA’s board of directors, writes about the proposed bylaws changes here: Providing a Voice to All of Our Members at the National Board Level

Our Process: The Fort Worth PRSA board held a discussion on these leadership/governance proposals during the September 4 meeting. This post will be shared with membership to gather feedback for a month.

As the delegates for the Greater Fort Worth Chapter of PRSA, we would like to make sure the membership is fully informed of the changes proposed, and would like to invite your comments and concerns. The Board of Directors of the chapter will make their recommendation to the chapter delegates at the Oct. 2 meeting, so we ask that you comment by Sept. 30 so that we have time to compile the information to present to the board.

Please review the available information, and let us know your thoughts.

Update 10/2/14: Following our chapter’s procedure to gather feedback and two board meeting discussions, Fort Worth PRSA will vote for proposals 1401 and 1402.

Fort Worth PRSA members and guests are invited to the chapter community service project. This year, we’re taking our talents to the Trinity. We will offer up some time to serve our community on Saturday, September 20 from 8:30 a.m. to 11:00 a.m. at the Crystelle Waggoner Trailhead location of Trinity River Trash Bash.

Please be sure to include Fort Worth PRSA in the ‘Organization’ box and select Crystelle Waggoner Trailhead from the drop-down menu.