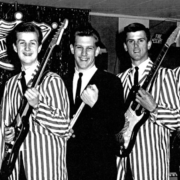 A government shutdown is no laughing matter. But government work can be pretty funny, and that was the case in February 1964, when the FBI launched a major investigation into … a song. “Louie Louie” was a demo record cut by in one take by the Kingsmen, a second-tier band. The production was so shoddy it rendered the lyrics unintelligible, so much so that when the song was released in May 1963, one DJ declared it the worst single of the week.

Despite – or rather, because of — its faults, Louie Louie eventually reached No. 2 on the charts. Quite possibly, the song would have faded into obscurity after that. But it was rescued by a highly effective marketing tactic that has withstood the test of time: Someone took offense.

Both youth and parents were concerned that the lyrics were obscene – or rather — that they might be obscene. In January 1964, a headline in the Indianapolis news announced, “Record held naughty, air ban asked.” The next month, a distressed parent wrote to Attorney General Robert Kennedy, worried that “This land of ours is headed for an extreme state of moral degradation.”

And so the feds set about stopping the degradation. The FCC questioned the record label, suspecting that the lyrics were made unintelligible out of “improper motivation.” And FBI agents watched the band on tour and tried playing the song at different speeds. But they were never able to make out the lyrics; curiously, they never thought to interview the lead singer or read the printed lyrics. As the BBC later understated, “this was not the FBI’s finest hour.”

Then, after 30 months and more than 100 pages of documentation, the FBI closed the investigation, concluding that the song was “unintelligible at any speed,” which would make for a great name for a band. Not incidentally, the incomprehensible effect was unintentional. But while the actual lyrics are not the least bit offensive, there IS in fact an obscenity in the song, which can be clearly heard. Hey, don’t feel bad if you missed it – the FBI did, too.

Today, there are more than 1,500 versions of Louie Louie. It’s been included in more than 30 movies, has generated a book and a documentary, and April 11 is International Louie Louie Day. (Shouldn’t that be a federal holiday?) Rolling Stone identified Louie Louie as the fourth most-influential recording of all time; it’s also one of the greatest unintentional PR coups of all time.

Which should help remind us that, while PR pros work very hard to give our clients the best possible exposure, sometimes, our most effective tactic might be to just let others do the work for us. No offense, mind you. 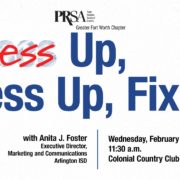 When a crisis hits, and it will, you need a sure-fire game plan to respond effectively and immediately. In today’s world, information moves at a rapid pace so when you mess up, and you will, be ready to fess up and fix it right away!

Hear from Anita J. Foster, Executive Director, Marketing and Communications at the Arlington ISD, to hear hilarious, horrifying and humbling examples of how to handle any crisis that comes your way. There’s just no reason to learn on our own when we have major brands like KitchenAid, JC Penney, Egypt Air, American Red Cross and others to learn from. Be ready to laugh and cry as we walk through some classic mess ups, fess ups and fix its, and how to incorporate this strategy into your crisis communications plan.