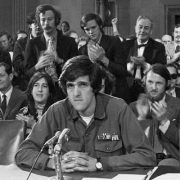 People often discuss politics using military terms. We refer to “campaigns” and “war chests,” or lament, “But we can’t count on the French.”

Coincidentally, one of the more memorable recent political PR campaigns involved military service—particularly, that of John Kerry, the Democratic presidential candidate in 2004. While serving in Vietnam, Kerry had earned three Purple Heart medals, as well as the Bronze and Silver medals.

Kerry’s military record appeared to be an impregnable front line. But a group called the Swift Boat Veterans for Truth (SBVT) thought otherwise, and set out to prove it. In a press conference, they announced that their mission was to “accurately portray” Kerry’s service in Vietnam, and they presented a statement that was signed by a regiment of veterans. Or maybe it was a battalion—in any case, it was a lot.

In August 2004, they launched, if you will, an all-out assault on Kerry’s record. Two members of the group published a book about Kerry titled, “Unfit for Command.” They also created a website and a series of well-crafted commercials featuring comments from several concerned vets, who questioned Kerry’s honesty, character, courage, and woefully unassertive eyebrows.

Kerry’s campaign responded, noting that two of the vets appearing in the commercials had previously supported him, and one of the retired officers attacking him had previously written commendations.

Other questions popped up. Some of the interviewees said their comments had been edited in a misleading fashion, the military doctor who accused Kerry of lying about his wounds had no record of having ever treated him, and one “witness” later admitted he had no firsthand knowledge of the events.

Republican Sen. John McCain, himself a Vietnam vet, condemned the ads, saying they were “dishonest and dishonorable.” And as I’m sure you all remember, the group’s initial statement was signed by some suspicious Navy vets, including Popeye, Gilligan and Capt. Jack Sparrow.

The strong resistance did not deter the SBVT troops, who ran four commercials and did numerous interviews. At the end of the month, they called on Kerry to release all his military and medical records, and released an open letter stating, “Tell the Truth and We’ll Stop the Ads.” To which the Kerry campaign reportedly responded, “You can’t make me, you can’t make me.”

In a matter of weeks, the SWBT campaign had changed the arc of the contest. But did it also tip the election? Many of George W. Bush’s supporters thought so; one conservative columnist wrote that the SWBT’s efforts “gave Bush a chance,” and another wrote, “There is not a doubt in my mind this was the difference in the race.” Kerry himself later wrote, “If I were a citizen watching that ad … I wouldn’t vote for me.” (Nor would Ralph Nader.)

For a while, “swift boating” became a noun referring to the act of making exaggerated or unsubstantiated allegations to damage someone’s credibility. Today of course, we just call it Tweeting.

PR pros may not agree on whether the SWBT campaign is something to be celebrated or shunned. But there’s little doubt it’s a clear example of the critical role PR can have in a presidential election.

And look, here comes one now.