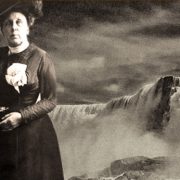 Some people will go to any length to get some publicity. But others will go to any depth, and such was the case on Oct. 24, 1901, when Annie Edson Taylor successfully plunged over Niagara Falls in a barrel.

But there was a dark side to Taylor’s adventure: It was motivated primarily by a need for money. A widow and former teacher, Taylor had struggled financially for years. The stunt, she hoped, would bring her fame and fortune. And this was years before the premier of “Survivor.”

For a modestly educated retiree, Taylor was quite adept at strategic planning. For one, the Michigan resident planned the trip to coincide with the Pan-American Exposition scheduled for nearby Buffalo. The barrel was custom-made, featuring a mattress and a weighted bottom. She also hired an associate, Frank Russell, to go to New York and generate advance publicity.

And when Taylor arrived, she did a bold but primitive version of A-B testing, sending the barrel over the falls with a cat in it. The feline survived, and Taylor, having dubbed herself “The Queen of the Mist,” posed for photos with the cat and the barrel.

Taylor’s own trip took less than 20 minutes, and like the cat, she emerged relatively unscathed and was greeted by the press. “If it was with my dying breath,” she said, “I would caution anyone against attempting the feat,” possibly adding, “At least not without first signing a non-compete agreement.”

As she had hoped, Taylor enjoyed a burst of celebrity, getting speaking engagements. Unfortunately, the fame did not last long. Adding to her woes, the barrel was stolen, with a prime suspect being her PR man, Frank Russell. Taylor, who had risked her life to achieve financial security, died in poverty at age 82.

Her attempts to discourage others from challenging the falls also were not successful. Since her plunge, more than 25 people are known to have taken the trip, with at least 10 dying. (This does not include the approximately 25 people who die each year during suicide attempts.)

Ultimately, the real PR winner is, of course, the falls themselves. At least 9 million people visit the site each year, which is now supported by a state park (the oldest in the United States), a restaurant, a conference center and an entertainment district. Plans for a giant mural honoring the World Champion Buffalo Bills remain on hold.

Running a successful PR campaign isn’t the easiest thing to do. But the next time a client has you over a barrel, remember that it really could be worse. Because while the sky may be the limit for us, a 160-foot plunge is a different matter.