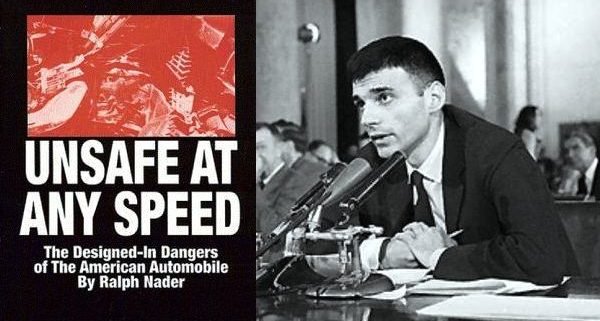 In 1966, a carmaker’s dubious PR strategy crashed and burned spectacularly

When companies are confronted with bad publicity, they must decide how to respond; one option they might avoid is to make the situation worse. But that’s what happened on Nov. 30, 1965, when the book, “Unsafe at Any Speed: The Designed-In Dangers of the American Automobile” was released.

The author was Ralph Nader, a 31-year-old lawyer. He had been interested in auto safety for several years (even if hardly anyone else was) and the book was a culmination of his research. And it did not pull any punches; the opening sentence reads, “For over half a century the automobile has brought death, injury and the most inestimable sorrow and deprivation to millions of people.”

While Nader was critical of the industry as a whole, he took particular aim at one car, the Chevrolet Corvair. Nader maintained that the car’s faulty design put drivers at a greater risk of losing control of the vehicle and rolling it.

The day the book was published, the New York Times ran a modest article about it; the next day, they ran an article where auto industry execs refuted the allegations. But beyond that, the book got little, shall we say, traction. Nader’s work was in danger of being relegated to the junkyard of abandoned car books.

But General Motors, the parent company of Chevy, had an idea. Perhaps concerned about the potential consequences of Nader’s book, they launched a campaign to discredit him; I don’t recall this course being offered in my college’s PR curriculum, but we were not in one of the Power Conferences.

GM hired a team of private investigators to poke into Nader’s personal life. They allegedly followed him, made harassing phone calls, tapped his phone and, under false pretenses, questioned his friends. As the lead detective wrote (yes, wrote), the goal was to examine “his politics, his marital status, his friends, his women, boys, etc., drinking, dope, jobs, in fact all facets of his life.” And for good measure, they had a couple of women try to seduce him. (They failed).

In February 1966, the Washington Post ran a story reporting Nader’s allegations. GM’s next PR step was equally curious; in March, they admitted they had indeed investigated Nader, but only as a “routine” matter—because you know, we’ve all been asked common background questions about our interest in boys.

Later in March came the real PR fiasco, when James Roche, GM’s CEO, appeared before a Senate committee. In that hearing, he denied some of the worst allegations. But he also formally apologized to Nader. And when asked to address GM’s original explanation of a “routine” investigation, Roche said it must have been caused by a miscommunication. Remember, when all else fails, blame the PR team.

The hearing was front-page news; it’s not every day that a corporate CEO publicly apologizes. And now Nader’s book was in the news, too: by June, it was on the best-seller list. And in September, President Johnson signed the National Traffic and Motor Vehicle Safety Act, which required new safety standards, and created an agency to enforce them.

Nader would later receive $425,000 in compensation from GM; he went on to appear on the cover of Time, Newsweek and Esquire, with the latter publication suggesting he could be President, an idea which, at the time, probably appealed to Al Gore. Today, Nader is recognized as a leading consumer advocate, and safety features have become a prime selling point for virtually every car manufacturer except France’s Renault, whose slogan is reported to be, “It runs, okay?”

And we are left to ponder GM’s strategy: how else might they have responded? Is it ever okay to run a campaign to discredit a critic? And who is to blame for creating that hideous Pontiac Aztec?

These are complex questions, and we may not all agree on the answers. But we do know this much: driving a PR campaign is a lot like driving a car. Before you get on the road, it’s usually a good idea to first know where you want to end up.

In Need of a Cover-Up
Scroll to top