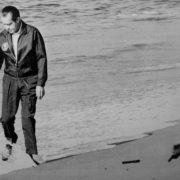 Another photo-op idea that was all washed up

They say a picture is worth—oh, never mind, you know that bit. This month’s column is not about the value of a great picture, but about the cost of a bad one.

That’s what happened on January 9, 1971, when President Nixon went for a walk on the beach near his home in San Clemente, CA.

Whether you were a fan of Nixon or not, most people agree he had a reputation for being somewhat stiff. With the 1972 election coming up, his aides thought it was a good idea to try and build up his image as a man of the people.

So they came up with a plan to have the President photographed while walking along the beach. It seemed like a good idea; after all, everyone enjoys spending some time on the beach (except for whales).

There was only one problem: Nixon took his stroll wearing his official Presidential windbreaker, slacks and wingtips. So he looks completely out of place, more like someone who is walking for help after his car broke down. This was not the way to be seen as a man of the people—unless perhaps the people are in North Korea.

To his defense, Nixon had a very good excuse: He always preferred to dress that way. As he once told a reporter, “I’m always wearing a coat and tie. Even when I’m alone. … That’s the way it is.”

And he was right: In fact, you can find many other shots of Nixon “relaxing” in non-relaxing clothes. There are photos of him at picnics, riding on a small boat, playing with his dog, hosing down the roof of his house, even lounging by his pool. In each shot, he is dressed like he is on his way to a conference, and in most of the photos, he looks like he’s the keynote speaker.

Nixon once said he thought it was more important for a politician to be respected than loved. As it worked out, he ended up with neither, but this PR move clearly did not serve him well.

A sidebar: The aides may have gotten their inspiration from Nixon’s old rival, President Kennedy, who also was photographed walking on the beach; what’s more, he was wearing a sport coat.

But JFK, ever the style maven, was shrewd enough to also wear khakis and sneakers, and the photo could have made the cover of GQ. Even more impressive, JFK also was once photographed on the beach with no shirt on. That shot alone had to be worth a few thousand votes.

And so another well-intentioned photo-op when awry. But this gaffe was no fault of Nixon’s; someone, anyone, on his team should have spoken up. It was similar to Michael Dukakis’ infamous tank ride, a topic we previously covered, as may be recalled by both of our regular readers.

As PR pros, we are assigned to always be on the lookout for ways to better “position” our clients. But positioning is a craft, not a science, and requires both skill and insight. So before we try to burnish our client’s credentials, it’s probably wise to make sure we’re using the right polish. 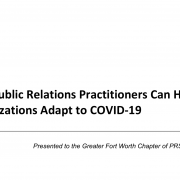 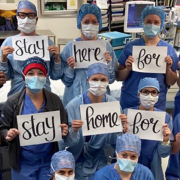 These are unprecedented times, which call for extraordinary actions – including another pandemic-themed column. This month, we present some random notes on our nation’s history with economic and health crises. Depending upon your perspective, this will either make you feel much better about our current situation or much worse. Either way, it might add a little historical perspective for PR pros as we advise their clients.

– The country’s first significant financial crisis began in 1785. Four more followed quickly, and 16 of the next 25 years would be marked by economic turmoil.

– In 1835, the Bank of Maryland collapsed. Citizens, convinced they had been scammed, attacked the houses of the bankers. The state militia was called out, killing some 20 people and wounding many more.

– In 1837, the Great Plains suffered through a smallpox epidemic, one of several that contributed to the decimation of the Native Americans. That same year, the Panic of 1837 occurred.

– The Panic of 1837 was horribly misnamed. In fact, the recession lasted for about seven years, during which time more than a third of the banks failed, millions of people were unemployed, and civil unrest was widespread. The difficult time is more accurately summed up by the historian’s book titled, “America’s first Great Depression: Economic Crisis and Political and Disorder after the Panic of 1837.”

– There have been multiple cholera epidemics around the world and in the U.S. Groups held responsible for starting the various outbreaks include Jews, gypsies, Indians, Filipinos, the Irish and the poor. Some American scientists blamed African Americans for causing cholera, while Tunisians blamed Europeans. Whoever was to blame, President Polk is believed to have died from it, along with millions of others.

– The Panic of 1873 lasted about four years, with the New York Stock Exchange closing for 10 days.

– Yet another panic occurred in 1893, again lasting about four years. In some states, the unemployment rate topped 25 percent, and the supply of gold reserves fell so low that J.P. Morgan had to give the government a bailout.

– Although smallpox has largely been eliminated in the U.S., there have been numerous epidemics. The last major domestic event occurred in Boston between 1901-1903, and had an estimated a 17 percent fatality rate.

– In 1920, Edith Wharton published what many consider to be her masterpiece, a book about the flu pandemic of 1918. It was titled, “The Age of Innocence.”

– From 1949 to 1960, there were four recessions.  Although the 1960 one was brief, Nixon, who was vice president at the time, believed it cost him the election, because voters blamed their woes on the Republicans.

– There were two recessions between 1980 and ’82. Unemployment reached almost 11 percent, and for six quarters, the GDP was negative.

– In 2013, CBS ran a program on the JFK assassination; it was titled, “When America Lost its Innocence.” The Orange County Register also called the event  “the weekend America lost its innocence.” The ‘60s, they added, were “a time Americans came to question almost everything we had once taken for granted.”

– After the September 11 attacks, a senior Time magazine essayist, (among others), declared the event marked “the end of the age of irony.” Before the attacks, he explained, “the good folks in charge of America’s intellectual life have insisted that nothing was to be believed in or taken seriously.”

– Not to be outdone by her elders, a 25-year-old journalist wrote of the attacks, “Maybe a coddled generation that bathed itself in sarcasm will get serious. Maybe we’ll stop acting so jaded.”

– Earlier this month, the Fort Worth Business Press’  Robert Francis wrote an insightful column noting the sudden surge in the use of the words “unprecedented” and “uncertain.” Just for fun, I typed “unpr,” and sure enough, Google’s third search response was “unprecedented times.”

– In March, author and speaker Simon Sinek released a video out titled, “These Are Not Unprecedented Times.” It’s has more than more than 270,000 views – and just wait until we’re able to start holding conferences again.

Unprecedented or not, these are definitely difficult times for many. Please be kind to one another. 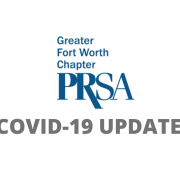 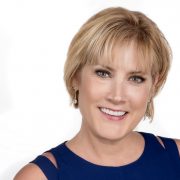 Gigi Westerman, APR, Fellow PRSA, has been recognized with the prestigious 2019 SafeHaven Legacy of
Women Award. Westerman, a long-time member of GFW PRSA, was honored in October, along with
nine others community leaders and advocates during the 27 th annual Legacy of Women awards
ceremony. SafeHaven’s mission is to end domestic violence through safety, support, prevention and
social change as the largest and most comprehensive domestic violence service provider in Tarrant
County.
The event “expands awareness of the astonishing one in three Tarrant County women who will
experience domestic violence in their lifetime, while honoring women who are leaders and advocates in
our region,” said Kathryn Jacob, president and CEO of Safehaven. “Legacy of Women exemplifies the
word ‘community’ with an unwavering support and continuous rise for change.”
Westerman is co-founder of The S &amp; G Group, an Arlington-based strategic planning and
communications firm that offers integrated communications, market research and analysis, branding,
media relations, crisis communications, issue management, and media training services to clients in the
government, nonprofit and business sectors. Westerman launched the firm in 2015 with long-time
business partner Sandra Brodnicki, APR.
Westerman’s commitment in Tarrant County is all encompassing, according to Michelle Clark, APR,
Associate Vice Chancellor, Advancement Strategy and Administration at Texas Christian University and
Director, Greater Fort Worth PRSA. “Gigi demonstrates that throughout all aspects of her life – while
working on behalf of clients, volunteering for nonprofit organizations, being a committed friend, and
making a difference as a leader and mentor,” Clark said. “She is insightful and unfailingly generous of her
expertise, and uses her time and talents to help make our community and profession better.”
Westerman has been an active member of PRSA since 2002, serving in local and national capacities.
After earning her accreditation in 2010, she dedicated herself to helping others obtain their APRs,
through individual mentorship and local and national accreditation efforts. After being inducted into the
PRSA College of Fellows, she was asked to lead the College of Fellows mentoring efforts and helped
develop a national plan to enhance mentorship within the organization. She has also served as a GFW
PRSA board member and assembly delegate since 2012, bringing local issues to the national stage.