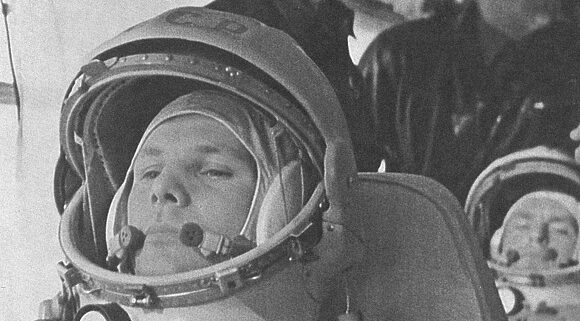 Nobody really wants to look at your travel pictures. And this was particularly true on April 12, 1961, when Soviet cosmonaut Yuri Gagarin successfully completed the first orbit of Earth. Gagarin’s flight thrilled the Communists – but terrified just about everyone else.

The U.S. was already fretting about the space race, as the Soviets had successfully launched the first satellite. Gagarin’s orbit was even more humiliating, especially since his flight took off on time.

Afterward, a Soviet scientist declared that Gagarin’s trip “shook the world.” And indeed, he wasn’t exaggerating. The flight was banner news on virtually every newspaper, with headlines like, “Soviet Man Orbits, Returns to Earth.”

Some publications had a more political angle. The Daily Worker, a pro-Communist U.S. paper, announced, “A Communist in Space,” while a paper with a slightly different perspective declared, “REDS ORBIT MAN.” The Christian Science Monitor struck a metaphysical tone, observing, “Man Leaps Free of Earth Shackles,” while Time magazine’s cover illustration of Gagarin included a Soviet hammer and sickle – in flight.

On television, ABC News intoned that “all of Russia was going wild,” and then discussed in detail how the Soviets were already planning a flight to the moon, where their female athletes could train in total secrecy.

In D.C, President Kennedy was desperate to find people who could help the U.S. catch up. “Let’s find somebody, anybody,” he said.” I don’t care if it’s the janitor over there, if he knows how.” The next month, Kennedy announced that the U.S. should set a goal to get a man to the moon before the end of the decade. In making the announcement, JFK abandoned his original campaign promise to eliminate potholes in America, a goal that continues to elude our brightest minds.

Fortunately, the U.S. marshaled its resources and responded brilliantly: In the years to come, we would complete many important space projects, including Star Trek, Apollo 13, All the Right Stuff and creating an entire planet of Ewoks.

It makes you proud to be an American. And proud to be a PR pro, as well. Because when it’s time to celebrate a client’s achievements, we know how to build ‘em, launch ’em and land ’em. And of course, the view is spectacular.

Join us for our next GFW PRSA luncheon on Wednesday, April 10, at Colonial Country...

Join us for our next GFW PRSA luncheon on Wednesday, May 8, at Colonial Country...
Scroll to top