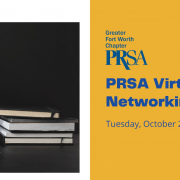 Join us via Zoom for a virtual networking night. PRSA members will be matched with PRSSA members and other new pros by interests and expertise. Joint networking events give students the opportunity to make industry connections, while giving PRSA members the opportunity to share their knowledge and make an impact on a young person’s career. The event will be free for members and non-members. Please complete a short questionnaire to sign up: https://forms.gle/nTNm6qULmPZhvrF37. 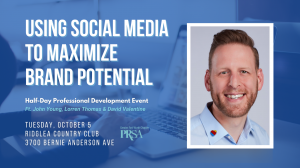 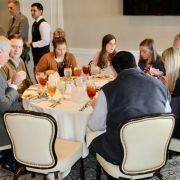 Thank you for sharing your thoughts on our spring membership survey. Your insight was valuable as we plan a return to in-person programs. We received 50 responses from our members, and the majority indicated they are ready for in-person programs. You can review the full survey results via the links below: 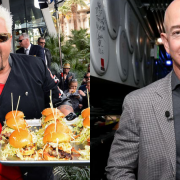 A random and humorous roundup to remind you how hard it is to get this job right—and how easy it is to get it wrong. Written by Jeff Rodriguez.

The reviews are in: The Hollywood Foreign Press Association (HFPA), hosts of the Golden Globe film awards, is embroiled in a dramatic story of its own. The organization is facing multiple allegations of ongoing, widespread sexism and racism, several stars have announced their intent to boycott the show, and NBC has canceled plans to air the 2022 ceremony. The HFPA has responded by acknowledging that systemic reform “is long overdue,” and released a plan to increase diversity, restrict the “gifts” members can receive and require diversity training for the members. Regrettably, they have yet to apologize for giving the Best Drama Award to “Avatar” over “The Hurt Locker.”

About-faces: The CDC continues to take lumps for its seemingly inconsistent mask messaging. One physician said the new guidance has caused “a giant mess,” and one national news magazine’s cover headline was “Mask Confusion.” Many people seem ready to be done with masks—and so is our cat.

False start: Japanese Olympic officials are excited about the impending games, but Japanese citizens are not. Two-time Japanese Olympic medalist Yuko Arimori publicly criticized the planning committee for a lack of transparency. “The organizers have had the past year to communicate with the public,” he said, “and yet public opinion hasn’t changed.” The U.S. has offered to assist by sending Ryan Lochte as a goodwill ambassador.

Out of Context (a recurring feature): Former Senator Rick Santorum, trying out his new role as a history teacher, told a group of students, “We birthed a nation from nothing. I mean, there was nothing here.” Native Americans could only assume that “Nothing” was the name of an obscure tribe in Massachusetts.

Silver Spoon, indeed: Former child actor Ricky Schroder decided to film himself at a Costco lecturing the store manager about their masking policy. Schroder later posted a video apologizing for his action, and asked if he can still redeem his reward points.

Please close the Windows: Bill and Melinda Gates simultaneously posted respectful, duplicate messages on their social media about their plans to divorce. “We no longer believe we can grow together as a couple,” they wrote. It was later reported that Bill may have been involved in some sexual improprieties, but no word yet on if he had been infected with a virus.

Past his Prime: Celebrity Chef Guy Fieri posted a video noting that Jeff Bezos had not contributed to his campaign to benefit restaurant industry workers. On the positive, Bezos did offer each restaurant worker one free month of Amazon Prime.

Central Emotional Intelligence Agency:  The CIA released a new recruitment video which is being maligned (and praised) for being a little too … well, something. In the ad, a female agent says, “I am unapologetically me. I want you to be unapologetically you.” The ad prompted Sen. Ted Cruz to comment, “If you’re a Chinese communist, or an Iranian Mullah…would this scare you? We’ve come a long way from Jason Bourne.” Cruz reportedly also was upset later on, when he learned that Iron Man is not real, either.

Follow the tweeter: In what may be a first, the Israeli Army used social media to coordinate a highly effective attack on Hamas. The Israelis falsely tweeted that they were currently launching a major attack on the Gaza Strip, which was widely picked up by local media. The news prompted the Hamas forces to rush forward to defend the area—at which point Israel really did launch an attack.

Giving it a shot: With COVID vaccination rates reportedly slumping among Republicans, a group of GOP lawmakers have made a video encouraging people to get the vaccine. One politician said getting vaccinated will help “end the government’s restrictions on our freedoms.”

TWITS
The roundup of social media posts that have since been deleted—or should be.

AND A FEW HITS…
The band 10,000 Maniacs announced on social media that they were resuming touring. One former fan responded that, without former leader singer Natalie Merchant, the band has lost its “gravitas.” The band directly responded to the disgruntled fan with this post: “We’ll make you a deal. We’ll buy tickets for you and a guest to our next weekend of shows at NYC. Steven will even buy you drinks after the show, and you can tell us where our gravitas has gone. You might even like it. And in that case, you buy the drinks! Be warned, the band is serious about playing but they enjoy it as well. You might see some smiles and even laughter on stage.”For a variety of reasons, it is a difficult time to be a police officer right now. The situation prompted Atlanta Police Officer Kelvin Dingle to post a clip of himself on TikTok, saying, “I am tired of every time I wake up in the morning, there’s someone else polarizing the fact that maybe law enforcement is just not a good thing. All of us are not bad… Most of us are not. There are bad people in every career. I give everything.” The clip has been viewed more than 1.4 million times.COVID made a mess of the year for many high school graduates, but Graham Williams, the owner of a gift company, found a nice way to offset some of the sadness. He compiled a book filled with life lessons and advice he collected from Colorado celebrities and personalities, everyone from elite athletes to civil servants. A legislator encouraged the grads to “Question everything and never turn down an adventure,” and five-time Olympian Missy Franklin advised, “Passion and love will take you further and fulfill you more than anything else will.” “High schoolers have really had a tough time and shown their mettle,” Wilson said, “and we’ve got a platform where we can use the tools we have to put a gift in front of all of them.”

QUOTE
“In a world you can be anything, be kind, because you are all no better than the cleaner.” – Julie Cousins, a 67-year-old office cleaning lady, in a hand-written note she gave to a bank manager, who apparently had been quite harsh with her the day before. Her son shared the letter on Twitter, and it has earned more than 150,000 likes.

Women business owners face many challenges, but they are adept at overcoming obstacles and finding success. What are the traits that these individuals share?

Cara Jacocks, Ph.D., has studied the stories and experiences of women business owners for more than a decade and has found them to be gritty, multitasking, hands-on leaders at home and in the workplace. In this presentation, she will share what she has learned about everyday leadership through the stories and experiences that these female entrepreneurs and executives have shared with her. 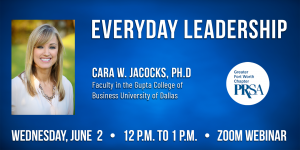