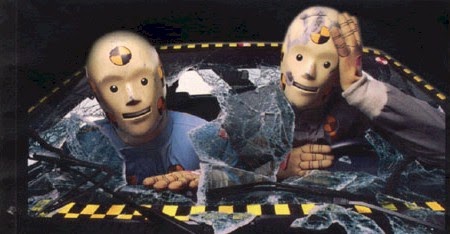 Over the years, seat belt PR campaigns have helped save thousands of lives–despite our objections.

This month’s column has some loose ends. For one, our research team has had a hard time confirming some specific dates. And two, our topic is seat belts–loose ones, to be exact.

Up until recently, Americans had a very uneasy relationship with seat belts. In the U.S., belts were introduced 1949; unfortunately traffic fatalities were already a concern. In 1959, one government official called it “the epidemic on the highways.”

But the innovation had more than a few skeptics. As one journalist reported, “Among the arguments put forth against seat belts was that they could cause internal injuries; that they prevented easy escapes from cars submerged in water; and that devices frequently failed.” The reporter added that, although researchers refuted these beliefs, “opposition remained fierce.”

Seat belts also were bad for business. In 1956, Ford’s advertising focused on their seat belts and other new safety features, while Chevy’s ads focused on power.  Chevy sales squashed the Blue Oval that year, prompting Henry Ford II to note that while their company was selling safety, “Chevrolet is selling cars.”

By 1963, 23 states had laws requiring carmakers to put seatbelts in the driver’s seat, and in 1968, federal legislation was passed. The catch is, while the government was requiring car makers to install the seat belts, there was no law requiring people to actually wear them.

During the decade, the National Safety Council tried to nudge Americans along with their “Buckle Up for Safety” PR campaign; the jingles were quite cute and still worth listening to.

The real struggle began in December 1984, when New York became the first state to require the use of seat belts. Notably, Texas was not far behind, passing its law in September 1985–before Oklahoma, Louisiana and Arkansas.  (To be fair, Arkansas did not really have a need for the law at that time, as most of the state’s vehicles were on cinder blocks.)

Opposition remained fierce. A radio personality gathered 45,000 signatures calling for a referendum, and some people cut the belts out. A national columnist compared a seat belt law to being fined for leaving the skin on your chicken, while an editorial writer railed, “In this country, saving freedom is more important than trying to regulate lives through legislation.” And no, I did not steal that line from my Twitter feed.

A regional survey confirmed the resistance, with many drivers finding seat belts to be “ineffective, inconvenient, and uncomfortable.” (Notably, the report also found that belt opposition was more likely “among persons who reported that they drove after marijuana use, or heavy drinking, or both.”)

Enter Vince and Larry, the crash test dummies. This PR campaign was introduced some time in 1985 (another loose end). The duo wrapped their serious message in clever humor and the tagline, “You could learn a lot from a dummy.” The campaign ran until 1999, winning numerous awards. More important, Vince and Larry are credited with dramatically increasing seat belt usage. In 2010, the costumes were (carefully) moved to the Smithsonian.

Accelerate to May 2002, when “Click It or Ticket” went nationwide. This PR campaign also made an impact: By 2008, seat belt usage had increased to 83 percent.

Today, the only state without a seat belt law is New Hampshire, whose state motto, fittingly, is “Live Free or Die.” The National Highway Something Something reports that from 2013-17, seat belts saved approximately 69,000 lives; their current slogan is, “Wear your belt every time—no matter how uncomfortable it feels or how far you’re going.” (Incidentally, if you want to see just how wimpy American PR campaigns really are, search for New Zealand seatbelt safety campaign.)

In June, the government concluded a month-long traffic safety radio campaign that ran in 13 states, including Texas. Chances are, you didn’t hear the ads—or perhaps you just didn’t notice them. After all, seat belts now are just so routine.

And what was once considered a radical affront to our liberty has become a norm most people not only tolerate but desire. But it has been a long road. As one journalist noted, seat belt acceptance required “public service campaigns, legal enforcement, and even regular reminders from our cars themselves.”

So take it from Vince and Larry: Skilled and dedicated PR professionals have repeatedly shown they can influence our thinking and save lives—if we will let them.

Whatever Floats Your Boat
Scroll to top